Te Hiku Hauora Health Promoters are encouraging smokers to think about the impact their habit has on their whanau as an incentive to kick the habit this year.

The New Zealand World Smokefree Day message “It’s about whanau”, centres around protecting future generations by not exposing them to second-hand smoke or passing dangerous habits on to them.

Internationally, World Smokefree Day is known as World No Tobacco Day, and is celebrated annually on May 31. World Smokefree Day promotes taking control to quit now and supporting each other to take the steps to become smokefree. It’s a great opportunity to stand together as a family or a community and show your support to the future of this country and the health of future generations.

The day is also aimed at non-smokers to encourage and support whānau to quit smoking. The protection of children and future generations is central to the smoke free kaupapa.

World Smokefree Day is a perfect opportunity to work together to achieve the goal of a Smokefree Aotearoa 2025, encouraging and supporting more people to quit to have a future in which our children and grandchildren will enjoy tobacco-free lives.

Join Te Hiku Hauora on May 26th at the Old Pak-n-Save car park where there will be FREE healthy kai and activities for the whole whanau, a range of prizes to be won for all ages and music played between 10am till 2pm. Nau mai, haere mai and find out about how you can become smokefree. 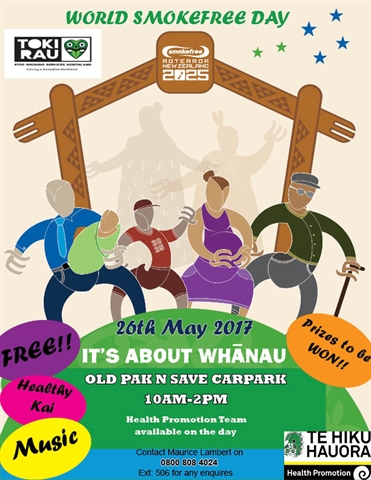