Matariki by its rising and setting signalled the time to commence certain activities.

Matariki re-appears. Whanui starts its flight. Being the sign of the New Year!

The rising of the star constellation, known as Matariki, is an important time in the Māori calendar. It heralds in the Māori New Year, which is a time to connect with, and give thanks to the land, sea and sky.

Matariki is also a celebration of people, culture, language, spirituality and history, marking the start of a new phase of life. It is a time to enjoy being with whanau and friends and a time to remember those who came before and the legacy they have left behind, and also to learn more about whakapapa (genealogy).

Every year Tom Allan holds free talks for all Te Hiku Hauora kaimahi, explaining the history and meaning of Matariki. These talks are always well attended and enjoyed.

“Growing up in Northland, I never heard of Matariki as being the start of Maori New Year. It was never mentioned at school and I never heard it mentioned by Kaumatua either. I did however hear about Puanga.  Puanga, also known as Rigel, is located just above Tautoro (Orion’s belt or part of the ‘Pot’ constellation). In whakapapa terms, Puanga is an older brother to Matariki.  Puanga was more commonly observed as the start of the Maori New Year by the West Coast tribes and parts of Northland. The celebration of Matariki made a revival up here about the year 2000.”

“When I was at high school, I would sometimes accompany my friend’s mum to their little whare at Tauroa.  Having no radio or TV, looking at the stars was really the only other option for entertainment. She pointed out Puanga as the star that brought the Maori New Year.  ‘Puanga kai rau’(Puanga bringer of food) was her whakatauki (proverb) for that star. Matariki was merely pointed out as the seven sisters.”

“When I became interested in tataiarorangi (star lore) I learned a lot more about Matariki. To me, Matariki is only an indicator of what the coming year will be like according to her appearance. I recognise Puanga as the tohu (sign) for the New Year but at the same time recognise the importance of Matariki to other people and welcome the revivalof the celebrations surrounding the arrival of Matariki.”

To locate Matariki follow the line of Orion’s belt (the bottom of the ‘pot’ or Tautoru) down to the left, through Te Kokota (the bright triangle of stars) known also as the face of Taurus the Bull, then Matariki can be seen as a small twinkling mass of light.

Tom’s tip: “Get up really early on the 25th of June, look north east to the horizon and see if you can observe the rising of Matariki, Waiti, Waita, Tupu A Nuku, Tupu A Rangi, Waipuna A Rangi and Uru A Rangi. 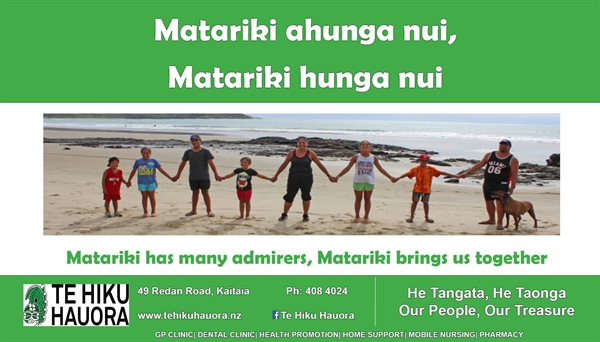