One of the most significant celebrations in the Māori calendar, which takes place in the month of June, is Matariki.

Matariki is the Maori word for the cluster of stars also known as Pleiades, and literally means the ‘eyes of god’ (mataariki) or ‘little eyes’ (mata riki).

According to myth, when Ranginui, the sky father, and Papatūānuku, the earth mother, were separated by their children, the god of the winds, Tāwhirimātea, became so angry that he tore out his eyes and threw them into the heavens.

Matariki is a celebration of people, culture, language, spirituality and history, marking the start of a new phase of life. It is a time to enjoy being with whanau and friends and a time to remember those who came before and the legacy they have left behind, and also to learn more about whakapapa (genealogy).

Matariki also signals other new beginnings. A time to plant trees and prepare the land for planting crops. The New Year is a good time to reflect on your place in the world, to reawaken old skills or try out new ones and set new goals.

Matariki is recognised widely in the Pacific where it was an important astronomical sign to sailors both as a navigational aid and as a sign that the weather was safe for long voyages with the stormy season past. Early Greek seamen knew them as the ‘sailing stars’ and would only sail when the stars were visible at night.

Matariki is sometimes hard to spot if you’re not sure what you’re looking for but if you follow the line of Orion’s belt (the bottom of the ‘pot’ or Tautoru) down to the left, through Te Kokota (the bright triangle of stars) known also as the face of Taurus the Bull, then Matariki can be seen as a small twinkling mass of light.

Matariki is lying about 440 light years away and actually consists of more than 500 stars but only about 14 of these can be seen under ideal viewing conditions and usually only six or seven can be made out with the naked eye. Through binoculars or a telescope, the individual stars can be quite easily made out.

Matariki tāpuapua
The Pleiades season when water lies in pools. 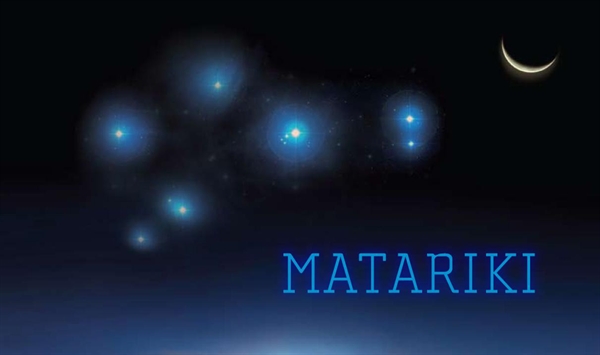