“Kaua koutou e mataku, Go for it, don’t stop, and don’t be frightened of the new things that are going to happen”. These are the words spoken by the first Chairperson of Te Hauora O Te Hiku O Te Ika, Muriwai Popata in 1995. These words inspired Michele Wi the current chairperson to strive for better healthcare for the people in the Far North and to not let any obstacles stand in her way.

These words proved comforting as Michele and Waata Kapa stood before a demolition crane in protest over the decision to destroy the old Nurses Home located beside the Kaitaia Hospital at 49 Redan Road. As she stood there, braced in protest against the destruction of the building, she challenged the authorities with the words “Well you’re NOT going to do that today, maybe tomorrow, but NOT today” Retaining the Nurses Home wasn’t a spur of the moment decision it was a kaupapa that was originated by the Trust’s first chairperson Muriwai Popata and Michele was determined they were going to honour this kaupapa.

In the early years they needed courage and determination as they still had to go home and face their people who would say “What are you lot up to now?” “Do you know what you’re doing?” These were challenging times as the building was going to be demolished by those who took no notice and showed no interest.  Motivated by this Michele broke through the chains using bolt cutters to make her mark and start us on the pathway to where Te Hiku Hauora are today.

In 1985, a group of inspirational women which included Muriwai Popata, Tui Hemi, June Potts, Luana Murray and Iris Nathan to name a few, came together in response to the comments by the National Party MP Simon Upton that “For 150 years we have not been able to stop the slide of Maori getting worse and worse” whether that was in areas of Health or Social Services. These words motivated this small group of wahine toa to combine their valuable skills and knowledge together to find the best way forward for the health of Maori in Muriwhenua. They were supported by professional nurses such as Adrianne Murray and Maureen Allan who were instrumental in forming a collective called Te Runanga O Nga Nahi.

Michele recalls that the biggest challenges for them at the time came from their own people, based on the concerns that the creation of Maori led health services may jeopardise the existing hospital and health services. As a fledgling organisation in its developmental years the Trust was yet to establish a working history for itself. The role of the trustees then was to establish the Trust then for it to become Iwi owned, to be on the ground in their own Iwi, bringing together the moemoea (dreams), wawata (aspirations), challenges and disagreements.

When Michele became Deputy Chairperson, in her own words: “A very unwilling one I must add” because she believed there were others in the group that had more knowledge and skills. Michele found it to be a frightening and challenging point in her life, trying to do the right thing. They all worked so hard for over those many years, who wanted to get it wrong, certainly not Michele. They were fortunate to have people such as Pete Davis and Robert Gable as their accountants, with continued support of the nurses.

One of the biggest challenges Michele encountered as chairperson was having to tell the DHB “We will never pay rent, you didn’t want this place.” The nurse’s home was then placed under OTS (Office of Treaty Settlement) for some years as claims were made by all Iwi to have the hospital and the grounds returned back to them, as of today the building is secured with Te Rarawa and Ngai Takoto.

Michele remained as chairperson for three years until the passing of her mother, Tere Gravenor then came on board as chair and did a marvellous job until she passed, Dr Bruce Gregory took over and when he passed away Michele again picked up the challenge. By now Michele was having her own health challenges. This year Michele made the heart breaking decision to retire after 28 years pursuing and achieving better health outcomes for all, including Maori. The kaupapa that she’s been passionate about for many years.

The final words of this article most appropriately should come from Michele Wi herself:

For me I want to spend as much time now with my whanau I have a big whanau 38 mokopuna and 12 mokopuna tuarua I’m truly blessed… I’m going to miss this place it’s taken a huge chunk of my life but I know it’s in safe hands… I teach my mokopuna It’s a big world out there, you go out there and get it, and do the best you can, I will always be here in your heart… I would like to mihi to all the kaimahi who have been and gone and those that are still here with us today, You can have all the dreams it’s you that makes it happen… be nice, be kind and love one another. 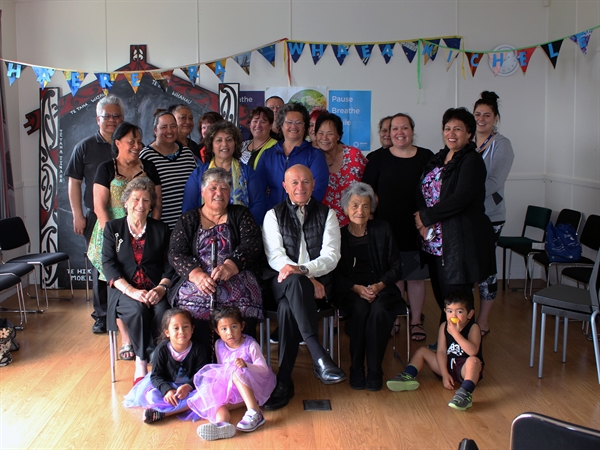